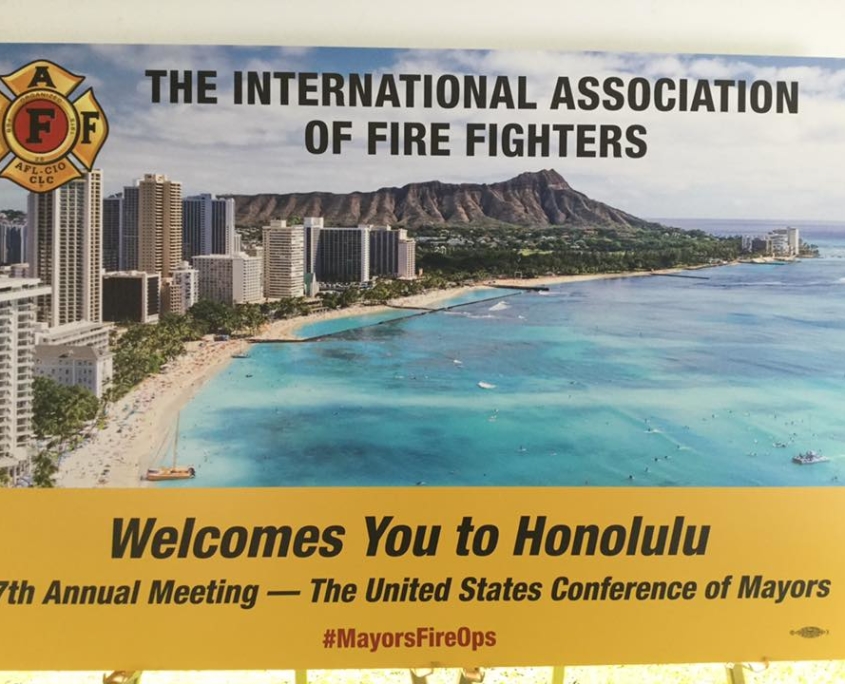 HFFA and the IAFF are proud of the more than 120 Honolulu fire fighters who assisted in the 2-day IAFF Fire Ops 101 at Kuroda Field. State and county elected officials and department staff were given the opportunity to experience up close some of what fire fighters respond to on a daily basis. Hawaii Fire Ops 101 revolved around (4) emergency response scenarios – live fire, cardiac arrest, fire ground survival and auto extrication – and coupled with two days of humidity and rain, participants really did “FEEL THE HEAT”!

Fire fighters did a superb job during in educating each group about the realities of the occupation, displaying such professionalism amid the grueling heat conditions and it reflected in the comments received from participants. 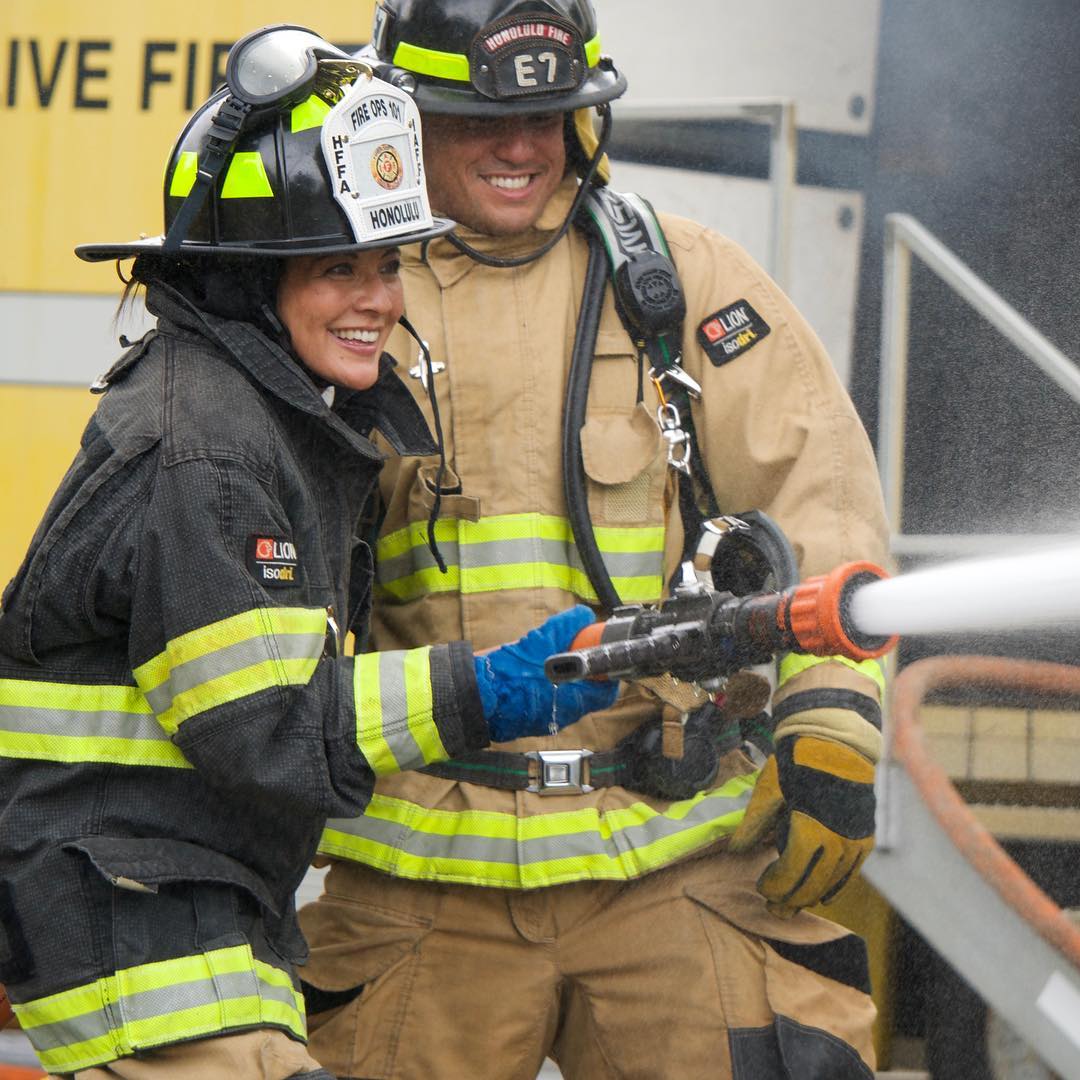 Representative Val Okimoto (District 36 – Mililani)
“Dressed in full gear, I was able to catch a glimpse into the life of our amazing first responders. As the daughter of a retired firefighter, I was so grateful for this experience. Some lessons learned… Holding a fire hose is much harder than it looks! Firefighters do not just have to be brave, but mentally sharp and quick thinking! Fire/heat intensity is crazy hot! And, firefighters are quite possibly the nicest people on earth!” 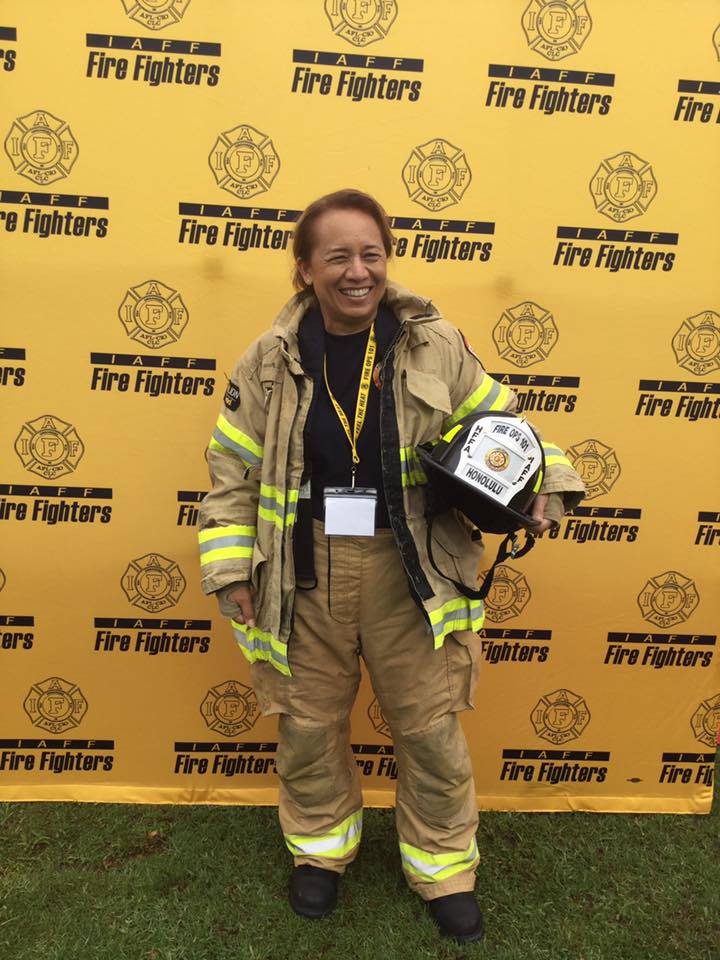 Representative Lynn DeCoite (District 13 – Molokai)
“I am so grateful for the opportunity to participate in the Fire Ops 101 training by the International Association or Fire Fighters (IAFF) and the Hawaii Fire Fighters Association (HFFA)! My colleagues and I participated in a series of drills; CPR Training, EMS, Ground Safety/Rescue, Auto Rescue, a live fire simulation and even operating the fire hose! This experience gave me an in-depth perspective of what our fire fighters need to be prepared for on a daily basis. Mahalo to IAFF and HFFA for everything you do!!” 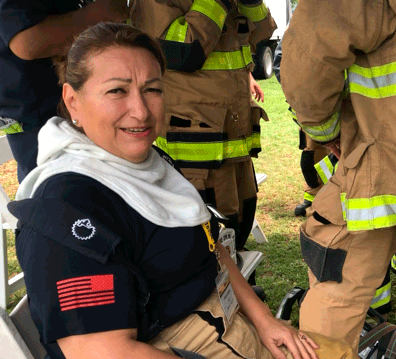 Mayor Pro Tem Victoria Baca of Moreno Valley CA
“I have so much respect for firefighters and the work they do. I see them differently now and I’m so thankful they’re here for us when we need them.” Mayor Baca chose not to participate in any of the exercises after she put on her turnout and boots. “This was enough for me! I’m just going to tag along.” 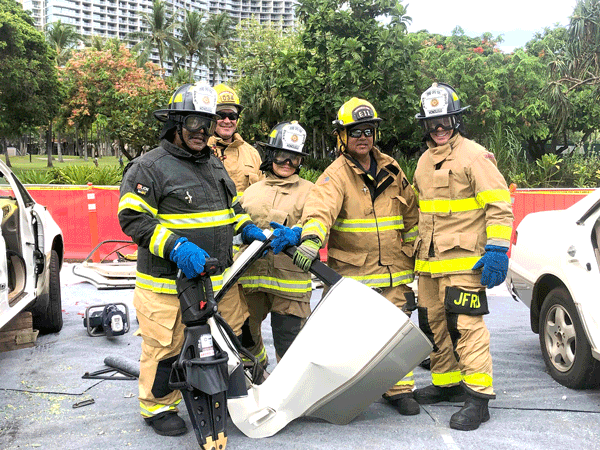 Mahalo to Captain Leroy Malterre Q34/1 and Bradlee Okemura E11/3 (above) who showed their group of mainland mayors the power of the ‘Jaws of Life’. Capt. Malterre, a 23-year veteran, shared his thoughts of his first Fire Ops 101, “It’s a good opportunity for these people to see what we do every day and hopefully they remember it. When it comes time for the budget, we hope they [the legislators] will give us a little extra consideration. I like it.”

Special thanks to BC Joseph Kostiha who was tasked to oversee with planning between the HFD and IAFF teams. He had much praise for everyone and the effort put into making this Fire Ops 101 a success:  “It took a lot of people to do a lot of work. The Honolulu Fire Department, Local 1463, and the IAFF worked hard to put on the event. Everyone worked hard and contributed a lot of time an effort — and it showed. The credit goes out to the guys who did the work. Planning is a big part, but the fire fighters, IMT, wranglers, and instructors were the keys to success. Everybody put a lot of time and effort into it. We understood what we needed to do and moved forward from that point. It took a lot of manpower, both mental and physical effort as well. We got through with no injuries and at the end of the day, we made a positive impact on local elected officials and various United States Mayors.” –BC Joseph Kostiha, Fire Operations

We thank Hawaii’s elected officials, decision-makers and the USCM attendees who joined the #IAFF, #HFFA1463, and #HonoluluFF for #FireOps101 – We hope they gained a lot from this learning experience!Check out IAFF Online for photos and watch the UCSM 2019 Video on YouTube.

Mahalo for your support of HFFA!